Understanding Our World of 2020: A Year in Review 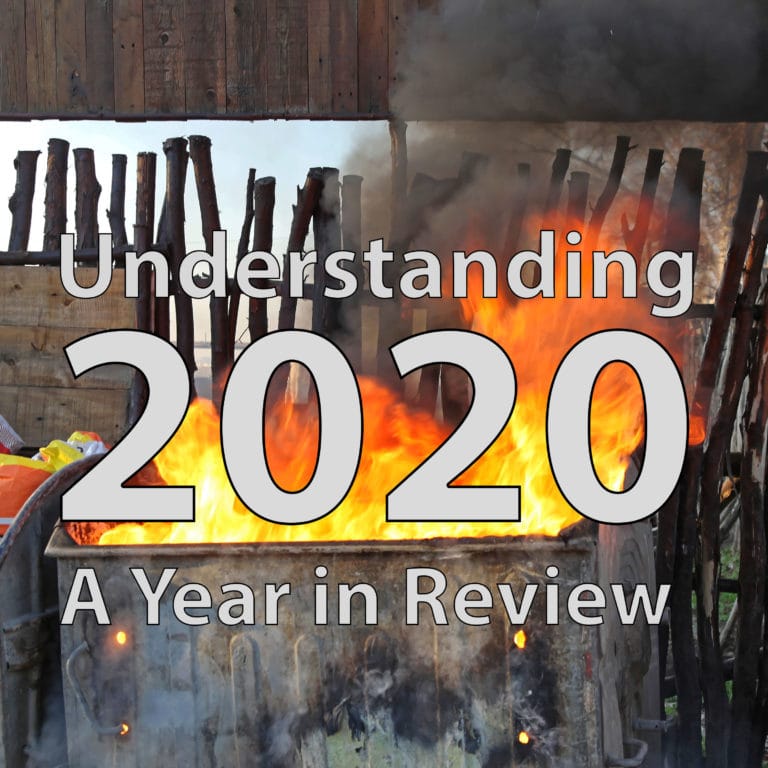 2020 has truly been a strange and confusing year. We’ve dealt with a global pandemic, civil unrest, political turmoil, and campaigns of misinformation in news and social media.

Personally, I’ve struggled to understand exactly what has happened this year and why. Many educated people I know and respect have promoted wild political conspiracy theories, COVID-19 misinformation, and hostile racial ideologies. Yes, this has been a truly baffling year for me on many occasions.

However, when I’m confused about something of this much importance, I tend to seek out information, educate myself, and then help educate others. In addition, since I’ve been largely stuck at home for most of 2020, I’ve had a lot more free time on my hands to watch educational videos, documentaries, movies, and TV shows.

Out of the dozens of videos I’ve watched this year, I’ve found a few of them to be tremendously valuable in helping me understand the big picture of our world in 2020. Each of these videos has helped to explain a piece of the overall puzzle in a way that was well-informed and easy to understand.

Two quick disclaimers though: First, while I try to always stay political neutrality, some of these videos are clearly politically controversial. Second, watching too many of these videos at once can make you feel a bit helpless and demoralized. So, you might want to space them out with some light comedies in between.

Below are my top picks for short educational videos, documentaries, movies, and TV shows that have helped me to better understand our world of 2020.

The Rules for Rulers

Explains why politicians behave the way they do from a political, economic, and psychological perspective. It focuses primarily on authoritarian leaders but also addresses democratic leaders as well.

The Moral Roots of Liberals and Conservatives

Explains the five moral values that form the basis of our political choices.  It explains what moral values people tend to honor most whether they lean politically to the right, to the left, or fall in the center.

The Psychological Traits that Shape Your Political Beliefs

Explains the link between our psychology and our politics. It shows how personality types fall largely into either liberal (i.e. prefers openness and flexibility) or conservative (i.e. prefers order and certainty).

Liberal vs. Conservative: A Neuroscientific Analysis

Explains the neuroscience of our political ideologies. It shows that we can predict a person’s political affiliation through brain scans alone and that we need both sides to function effectively as a society.

COVID-19: Why Vaccine Mistrust is Growing

Explains why mistrust in vaccines is growing in some parts of the world. It shows how previously held anti-vaccination beliefs were a gateway for misinformation about COVID-19 and politics.

Will America’s Disregard for Science Be the End of Its Reign?

Explains how America’s rebellious anti-establishment mentality has proven so successful in the past but has now become harmful to democracy in a technologically interconnected world of misinformation.

Explains the important difference between nationalism and fascism and how the consolidation of data may pose an existential threat to democracy. Yuval Noah Harari is one of my favorite authors of all time.

Trevor Noah’s Monolog on Racism in the US

Explains racism in the US in a way that anyone can understand. This is probably the most important short educational video I watched in 2020. Trevor Noah’s candid conversation style is quite powerful.

Explains the voter inequality that exists in US elections. It shows how certain groups of people have been systematically excluded from equal representation in voting even with civil-rights laws in place.

Explains the potential dangers of social media in our society. It includes accounts from several of the leading experts on social media. This is likely the most important documentary of the past decade.

Explains how social media is fueling the rise of surveillance capitalism. It shows how your data is being used for financial gain without your knowledge or consent. Data is now the most valuable asset in the world.

Explains the psychology of people who believe the earth is flat and other conspiracy theories. It helps humanize these people so you can better empathize with them and understand the nature of a conspiratorial mindset.

Explains what went wrong with the US response to COVID-19. It provides first-hand accounts from the people who were directly involved with the pandemic strategy, preparation, and failed execution.

All In: The Fight for Democracy

Explains the history of voter suppression in the US. It shows how various laws, societal barriers, and gerrymandering have disenfranchised various groups of citizens in our election process.

Capital in the Twenty-First Century

Explains how various forms of capitalism have all lead to an economy dominated by those with inherited wealth. It shows the tyranny of inherited wealth as it has risen to power and been destroyed many times throughout history.

Get Me Roger Stone

Explains why our political campaigns in the US are so negative and full of outrage. It shows how Roger Stone essentially created the playbook for the modern negative-campaign strategy that many candidates use today.

Explains the root cause of many problems in American politics. Spoiler alert, it’s neither republicans nor democrats, but rather a political system that rewards fundraising, corruption, and in-fighting.

Explains the psychology of malignant narcissists and the powerful effects they have on their followers. It focuses specifically on the current presidency; however, it is applicable to several other historical and current world leaders.

13th
Explains the criminalization of minorities in America. It covers Jim Crow laws, voter disenfranchisement, the war on drugs, mass incarceration, etc. If you really want to understand the Black Lives Matter movement, this is the best place to start.

Explains what happened in the UK with Brexit. It shows how the data-driven tactics of the “Vote Leave” campaign deceitfully convinced a subset of the UK population that exiting the EU was in their best interest.

Explores the history of Fox News and its rise to power as a cable news source. It tells the stories of the women who exposed CEO Roger Ailes for sexual harassment, misogyny, and willful deceit of the public.

Explains what happened with the 2016 election that led to Trump’s defeat of Hillary Clinton. It also provides insight into election interference, the presidential impeachment, and the role the FBI played.

The Loudest Voice in the Room

Explains, the history of Fox News, their rise to power in cable news, and their influence on the modern Republican Party. It’s similar to Bombshell but is a much more in-depth and thorough 7-part analysis.

The Daily Show with Trevor Noah

Explains pretty much everything happening in our world today: the pandemic, civil unrest, racism, the US election, and more. I don’t normally watch the news, but Trevor Noah has been a godsend for understanding our world in 2020.

When They See Us

Explains how racism and social prejudice is deeply woven into our justice system in the US. While these events took place in 1989, they closely mirror the same social injustice that continues in our society today.

The Story of Fascism in Europe

Explains how fascism rose in Europe. It explores the conditions that led to fascism, the charismatic leaders who promoted it, the totalitarian societies it built, and the millions of people who suffered as a result. While this is a documentary about the early 20th century, it’s lessons are still highly applicable today.

This documentary explains the lack of scientific evidence to support the “low-fat, high-carb” diet and how these public-health recommendations lead to the current health epidemic in the US. While this documentary doesn’t exactly fit into the core theme of 2020, it’s just too important to exclude from my list.

Sometimes the only way to effectively understand another person’s worldview is to explore it through fiction. The Watchmen is addressing some very difficult topics on racism in the US in a way everyone can understand and empathize with.

There were plenty of other videos I watched this year that helped me to better understand our world of 2020. However, these should get you started down the right path. If you feel I’ve missed an important video that should have been on my list, please be sure to send me a comment to let me know.

To understand our world of 2020 from a data-science perspective, please be sure to check out my online courses.